We had no choice: Starting in spring 2020, with the global impact of the COVID-19 pandemic, children all over the world continued their schooling via online classes. And it was, in this dramatic context, a solution; undoubtedly, much better than being away from schooling for months and months due to a lack of means and connectivity.

In almost a matter of days, administrations, schools and families improvised to connect with online classes; for better or worse, at least in the so-called developed world, the challenge was solved with the massive use of platforms from giants like Microsoft and Google. These solutions continued to be very useful throughout 2020-21, which was also largely marked by the pandemic. These were key months for the development of what is known as EdTech, the digitalization of education.

But now a report by the NGO Human Rights Watch (HRW) confirms what we feared: in the improvisation during those months, we opened the door to online systems that track children with the aim of algorithmically profiling them and selling them advertising.

Specifically, according to HRW, 89% of the EdTech applications they analysed monitored (or at least had the ability to monitor) the online behaviour of children, in most cases secretly and without parental consent.

The report, which is based on a press investigation involving media from several countries including El Mundo (Spain) and The Telegraph (Great Britain), details the type of information collected by these applications: where the children are, who their family and friends are, what kind of device they use, etc. The monitoring was also happening outside of school hours, using the devices’ cameras and microphones even when the children had already left their virtual classroom. “Some applications invisibly tagged children so that neither the children nor their families could get rid of the monitoring without throwing the device away in the trash”, the report says.

These applications, HRW reports, had the ability to send all the information collected to online advertising (AdTech) companies, so that these could more effectively segment their ads. It is behaviour-based advertising that, as the NGO emphasizes, is dangerous for children, as it can influence their opinions and beliefs at a stage in their lives when they are more vulnerable to manipulation.

The study also gives a scolding to the governments – state and regional – directly involved in development of educational platforms. Of the 49 analysed, 39 developed products that risked or infringed on children’s rights to privacy. In Spain, the Ministry of Education, the Generalitat de Catalunya and the Andalusian Government are mentioned.

The promise of Digital Education is very different; used properly, technology can dramatically improve our possibilities for personal and professional growth and expand opportunities for all. But it is essential to avoid the dangerous drift shown in the Human Rights Watch report. These intrusions into the private life of children, in their space for growth, are unfortunately not limited to the educational sphere, nor do they now have the mitigating circumstances of the rush and urgency caused by the pandemic. Children’s data cannot be just another lot in automated advertising auctions that decide which online ads reach us. They are children and teenagers, not online products. 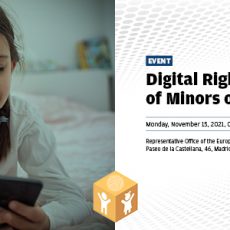 The EADT, with support from the European Commission, organises an event on the digital rights of children and adolescents